I often wander the streets of Sydney looking for interesting subjects to photograph when I noticed this guy sitting with his two dogs in the entrance to St James train station. What caught my eye was the sign directly behind him and the sheer number of people who simply ignored him as they went about their lives. 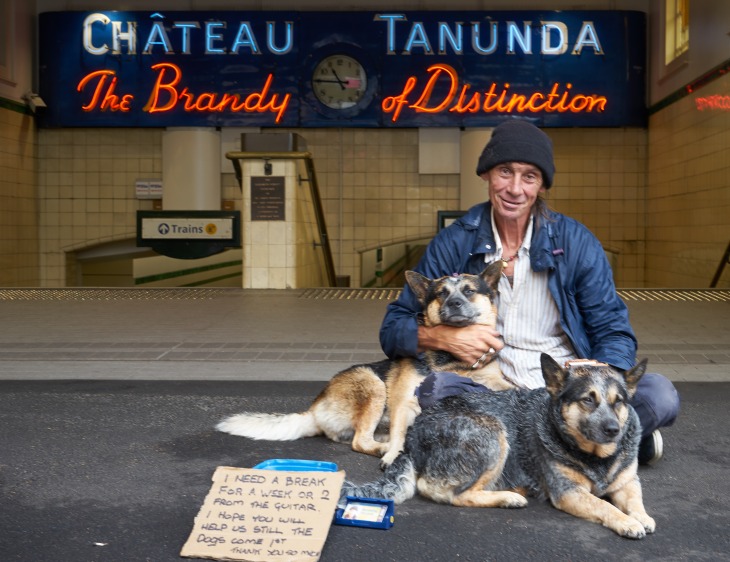 Normally I don’t like to photograph people who are homeless for many reasons and the main reason is that I don’t want to or seem to be taking advantage of them but I couldn’t resist asking him if he minded if I took his photo.

Walking up to him, I stuck my hand out and introduced myself, asking him about his dogs and he told me their names and  that one was the mother and the other the daughter but for the life of me I can’t remember which. The blue heeler that he is holding growled at me but the blue heeler at his feet didn’t mind a pat. He put down his harmonica and let me take this photo. I asked him if he minded if I took his photo. Much to my surprise he said yes.

I only took two photos and showed him the end result on the LCD screen. He said was pretty happy with the results and after a few more minutes of talking to him, I shook his hand, threw a few dollar coins in and left. Since I have downloaded the image and processed it I have this desire, this want to print the image in a decent size, say 12×10 and then give it to him. He won’t be able to eat or drink the photo but I think the problem I’ll have is finding him again to give him the photo.

I think it paid off walking up to him and speaking to him. What do you think?