I’ve been interested in Smoke Art photography for some time now and what sparked that interest was an article on Smashing Magazine. They have done some amazing articles and Smoke Art is no 7 on the list of 50 Incredible Photography Techniques and there are plenty that you can do inside.

So due to the continuous amount of rain that we have had here for the last months or so in Queensland, Australia I decided that I needed to try Smoke Art Photography as it could be done indoors where I would be dry for a change and it would be a challenge.

It was harder than I imagined that’s for sure. I had some trouble getting the smoke to go where I wanted but that was probably because I thought that I needed some airflow through the house but what I needed was to open the door to let air in once there was to much smoke so it would clear and then close the door again to control the airflow. I also figured that I needed a black background and I certainly don’t own a professional photographers background nor the stands for them. So a quick search through the closet revealed two black t-shirts without any writing on them. I sat two kitchen chairs side by side and hung the black t-shirts over the backs of the chairs. Found one of my wife’s long black skirts and hung that over the seats of the chairs so it would all be black. Without realising it I had made my own improvised black background.

My wife was fairly adamant that I don’t go burning holes in the shirts and definitely not in her skirt. Nor should I burn the house down or completely fill it with smoke. Artistic creation knows no boundaries and what is few holes in some clothes.

I used a tripod to steady the camera, and I also used a cable release to remotely activate the shutter so I wouldn’t get any camera shake. I also set the focus manually because the camera wouldn’t focus on the black t-shirts. I also decided that the ISO should be about 200 and I would experiment from there but I didn’t need to change it either. I also set my White Balance to Auto and let the camera decide what was right. If I didn’t like the white balance setting I could always adjust it in post processing if needed.

Now here is the important part, I darkened the room so I could control the amount of light coming in, closed all the blinds and turned out the lights, I found out that that I had just enough light to move around without knocking anything over. I also used the on camera flash and a flash gun (Nikon SB900) off to the side which fires when the on camera flash fires.

To make the smoke, I used incense sticks. I started with one and found that there wasn’t enough smoke so I doubled the amount of incense sticks. After about another 30 minutes, I realised that I still didn’t have enough smoke to achieve the effect that I wanted so I grabbed six incense sticks and lit them, Now I had some serious smoke. 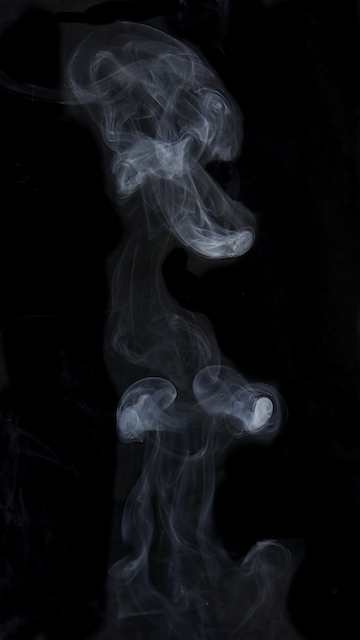 With post processing, I found that if I added a layer of contrast over the top and the dodged and burnt the background I could get it almost black. I also sharpened the image overall to make it clearer.

So these two photos are the two best shots of about 90 shots from an hour and half. The only reason that I stopped was it was turn to cook dinner and we needed the kitchen table. It was definitely a challenge.

I will be trying this technique again in the near future.